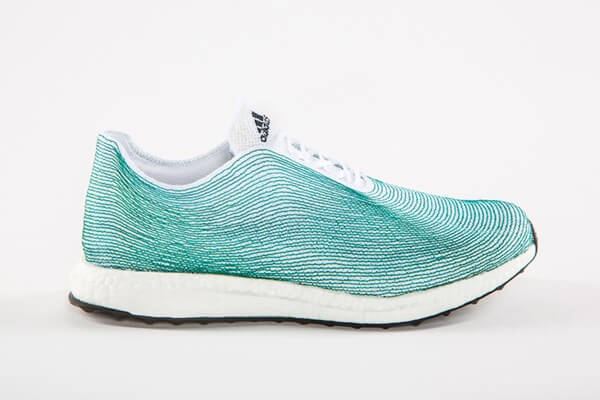 Shoes using Plastic Waste | In 2017, the German sportswear giant Adidas launched three new versions of its UltraBoost shoe made out of plastic found in the ocean. It teamed up with environmental initiative Parley for the Oceans to create the shoe. According to CNBC report, Adidas created & sold 1 million shoes made out of ocean plastic in 2017. Each pair of shoes reuses 11 plastic bottles.

Adidas first started making these shoes in collaboration with the environmental group Parley for the Oceans in 2015. As a result of this cooperation, plastic waste is intercepted on beaches, such as the Maldives, before it can reach the oceans. That up-cycled plastic waste is made into a yarn becoming a key component of the upper material of adidas footwear.

In addition to footwear, the company also produces apparel from the recycled material, such as the Champions League jersey for FC Bayern Munich and Alexander Zverev’s outfit for the Australian Open.

Recently, adidas signed the Climate Protection Charter for the Fashion Industry at the UN Climate Change Conference in Katowice, Poland, and agreed to reduce greenhouse gas emissions by 30 percent by 2030. In addition, adidas is committed to using only recycled polyester in every product and on every application where a solution exists by 2024. As a founding member of the Better Cotton Initiative, adidas meanwhile sources only sustainably produced cotton. Since 2016, adidas stores no longer use plastic bags.