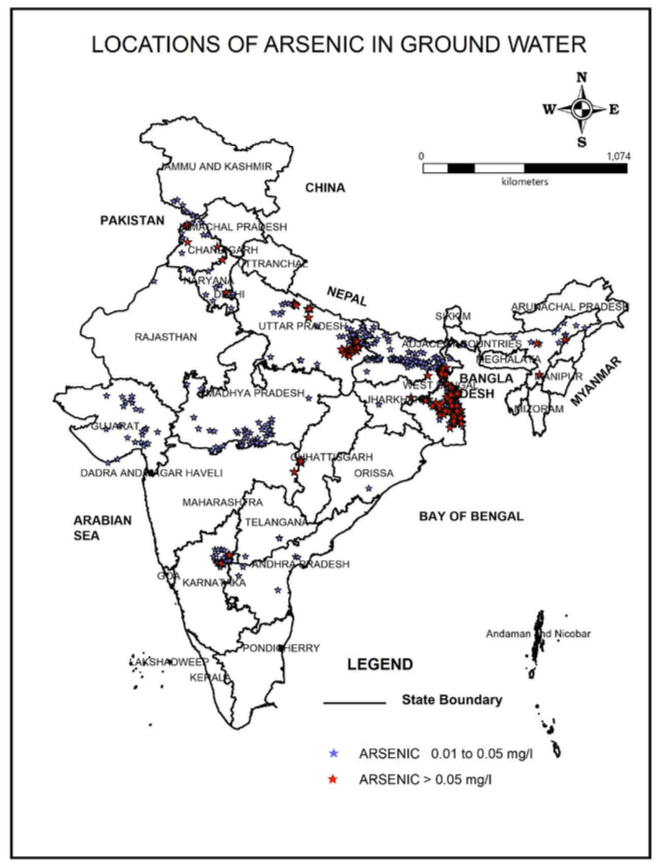 Arsenic is a naturally occurring trace element found in rocks, soils and the water in contact with them. Arsenic has been recognized as a toxic element and arsenic contamination in drinking water is considered a human health hazard.

The occurrence of Arsenic in ground water was first reported in 1980 in West Bengal in India. In West Bengal, 79 blocks in 8 districts have Arsenic beyond the permissible limit of 0.05 mg/l. The most affected areas are on the eastern side of Bhagirathi River in the districts of Malda, Murshidabad, Nadia, North 24 Parganas and South 24 Parganas and western side of the districts of Howrah, Hugli and Bardhman. The occurrence of Arsenic in ground water is mainly in the aquifers up to 100 m depth. The deeper aquifers are free from Arsenic contamination.

Apart from West Bengal, Arsenic contamination in ground water has been found in the states of Aasam, Bihar, Chattisgarh, Haryana, Jharkhand, Karnataka, Punjab, Uttar Pradesh, West Bengal. The occurrence of Arsenic in the states of Bihar, West Bengal and Uttar Pradesh is in alluvial formations but in the state of Chhattisgarh, it is in the volcanic rocks exclusively confined to N-S trending Dongargarh-Kotri ancient rift zone. It has also been reported in Golaghat, Jorhat, Lakhimpur, Nagaon, Nalbari, Sibsagar, Sonitpur district of Assam.

The map showing Arsenic hot spots ( Hot spots are locations where the arsenic concentration in ground water sample is more than the permissible limit of BIS, 0.01 mg/ L) in India is shown in Fig 1. The map has been prepared from the data on arsenic concentration in water samples mostly collected from the groundwater observation wells/ hand pumps. Arsenic contaminated areas have been shown as points based on analytical results of Central Ground Water Board.

The details of the locations along with Arsenic concentration are given in Table which shows the state wise list of districts in which occurrence of Arsenic has been reported in the range more than0.05 mg/ litre.