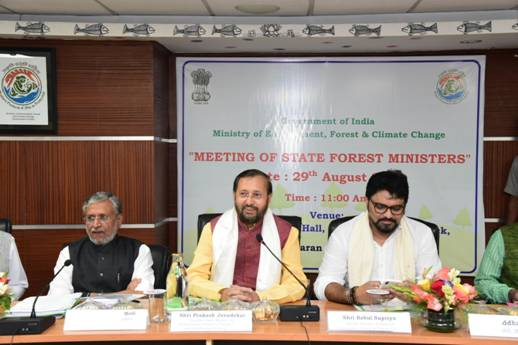 In a major boost towards promoting afforestation and achieving green objectives of the country, Union Minister for Environment, Forest and Climate Change, Shri Prakash Javadekar, today handed over Rs.47,436 crores of CAMPA funds to various states, in presence of Minister of State, MoEF&CC, Shri Babul Supriyo.

In a meeting of State Forest Ministers and Authorities held at New Delhi, the Environment Minister stated “The State budget for forests shall remain unaffected and the fund being transferred would be in addition to State Budget and it is expected that all States will utilize this fund towards forestry activities to achieve the objectives of the Nationally-Determined Contributions (NDCs) of increasing its forest & tree cover, which will create an additional carbon sink equivalent to 2.5 to 3 billion tonnes of carbon dioxide by the year 2030”. The Environment Minister further emphasized that the CAMPA funds cannot be used for payment of salary, travelling allowances, medical expenses, etc.

In 2009, Hon’ble Supreme Court permitted release of Rs.1000 crore every year to States/UTs for compensatory afforestation and other activities.  In 2014, Hon’ble Supreme Court permitted release of 10% of total deposit of states in the fund from interest accrued on the deposits. This Act has provisioned that CAMPA funds shall be kept in interest bearing non-lapsable Public Account. After detailed deliberations with CAG and Ministry of Finance and deliberations with other Stakeholders, the fund flow mechanism could be finalized and the CAF Rules were finally put in place in 2018.

After notification of CAF Rules, with approval of the Supreme Court on 28 Jan 2019, an amount of Rs.54,685 Crore from Ad-hoc CAMPA has been brought under the control of Government of India. So far 27 States/UTs have created accounts for receiving the Funds from Union Government and today funds to the tune of Rs.47,436 crore have been transferred to those States. The Fund shall be utilized as per the provisions of the CAF Act and CAF Rules.