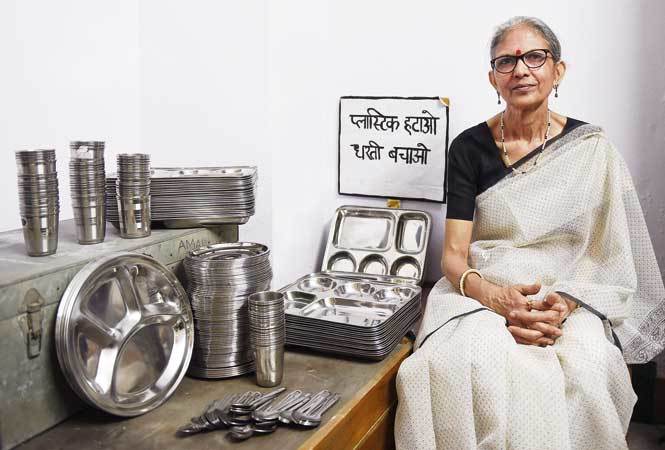 Apart from a tummy full of goodies and memories of good times, a potluck or house party also leaves behind heaps of disposable plastic cutlery. Be it a party at home, a community meal or a wedding, single-use plastic plates, spoons and glasses are considered essential. As the city grapples with the issue of waste management, some residents in Noida have started ‘crockery banks’, which let people borrow steel utensils for different occasions. Inspired by them, other residents have also created their own crockery banks to cut down the use of disposable plastic. A similar initiative was undertaken by Gurgaon resident Sameera Satija last year.

Savita Bhatia, a resident of Sector 15A in Noida, first read about Satija’s initiative last year. Inspired, she soon bought 50 units of steel cutlery for Rs 20,000 and spread the word about giving it out for free in her locality.
“I told people how eating in plastic plates or drinking tea in plastic cups is harmful for health and may even lead to cancer, apart from the fact that they pollute the environment. Now, whenever there’s a function at someone’s house in our sector, they take steel cutlery from us,” says the 62-year-old.

Dr Supriya Mahajan Sardana, a resident of Arun Vihar in Sector 37, started a similar bank called ‘Back to Steel’ a few months ago. She has 150 units of steel utensils to offer. “Crockery or utensil banks are one of the much-needed solutions for our exponentially growing mountains of single-use disposable trash generated in tonnes every single day. This bank is an ‘ask-use-wash-return’ service with no charges,” says the 43-year-old, who is a member of the residents’ group Sustainable Alternatives and Awareness against Plastics and Household waste (SAAPH).

What are Crockery Banks

Crockery banks are initiatives by city locals who have bought and kept steel utensils in bulk, to be lent out to people who need crockery for a party, function, jagran, or any large gathering. These utensils, once used, are returned to these banks after washing. Crockery banks help reduce the use of disposable plastic crockery and helps borrowers save money.

Madhu Mittal, who lives in ATS Greens-2, Sector 50, has over 800 units of steel utensils, which she gives to people for free across the city. “I started the initiative Jan Jagran Sangthan with just 50 units of steel cutlery about three years ago. It has expanded today,” says the 65-year-old.
Similarly, Sector 30 resident Pramod Verma started the initiative a month ago by investing Rs 36,000 to buy 100 units each of steel plates, spoons, glasses and serving bowls.

“In the last one month, we have received requests for our steel crockery twice. Utensils are kept at the common office in our sector so that anyone can take them, even when I am not home. I got to know about the initiative through a WhatsApp message and decided to take it up in order to save the environment,” says the businessman.

Going Back to steel utensils

The campaign to inspire people to cut down on the use of disposable plastic is now reaching street vendors and temples as well. Supriya’s group conducts regular anti-plastic drives in Brahmaputra Market in Sector 29, Noida, to urge street food vendors to switch to steel cutlery. On World Environment Day, they distributed steel glasses to all vendors in the market. “One golgappa vendor at the market, Vinod, has switched to steel bowls from plastic ones and we hope others will follow suit. He told us that it is more cost-effective as well,” says Supriya, a senior consultant at a private hospital in Noida.

A resident of Antriksh Greens in Sector 50, Noida, Colonel Gajraj Singh, decided to donate a set of steel utensils to his society’s community centre. “When I got to know about the initiative ‘Back to Steel’, I decided to do the same in my society as they hold community meals every month, which leads to a large amount of plastic trash. Now, they have become zero-plastic,” he says.

Mahima tells us how a temple in her sector now uses steel utensils for religious gatherings. “Any function at the temple would result in over 200 plastic plates and cups going to trash. We started giving steel crockery to the temple. Gradually, other residents in the area also came forward to donate steel utensils to the temple,” she says.

People are still apprehensive
Despite knowing about the health and environmental hazards of using plastic, some people still avoid using steel crockery, which is now easily available for free. “People still have doubts about hygiene and cleanliness while using steel utensils from these crockery banks,” says Supriya.
Savita agrees, “People say ‘we will have to pay to get the utensils cleaned. Kaun itni mehnat karega?’ We tell them that if they are getting utensils for free from us, they can spend some amount on getting them cleaned.”