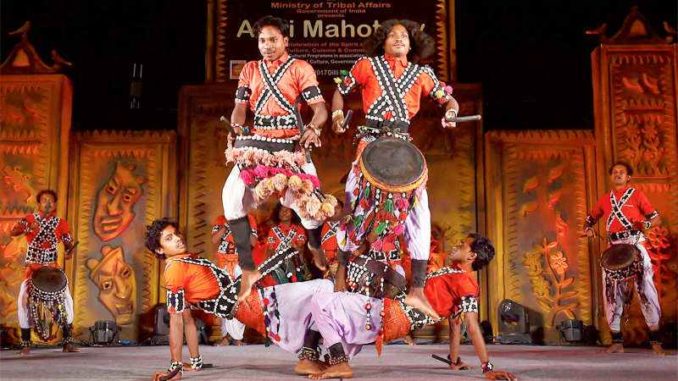 The Delhi Aadi Mahotsav will be organised at Dilli Haat, INA, New Delhi between 16th to 30th November, 2019. The theme of the festival is “a Celebration of the Spirit of Tribal Crafts, Culture and Commerce”, which represents the basic ethos of tribal life.  The festival, will feature exhibition-cum-sale of tribal handicrafts, art, paintings, fabric, jewellery and much more through 200 stalls.

Over 1000 tribal artisans and artists from 27 States will be participating in the festival. The event will be marked by mesmerizing performances and cultural shows, showcasing the products of tribal artisans based on the tribal rituals, harvest, festivals, martial art forms etc., from 20 States of the country.  The performances from different States shall be showcasing rich tribal cultural diversity like never-seen-before during the course of the event.

Also Read: Organic Mahotsav 2019 to be held in Udaipur

The concept of organising Aadi Mahotsav in major cities has proved to be  a boon for tribal artisans by eliminating the middle man and providing direct access to large markets, otherwise impossible to reach for them. In line with the national aspiration to go cashless, the tribal merchandise stalls will be accepting payment through major credit/debit cards.

26 such festivals are planned to be organised during the current financial year.  Out of which, 8 festivals have been already organised at Shimla, Ooty, Leh-Ladakh, Visakhapatnam, Noida, Indore, Pune and Bhubaneswar wherein about 900 tribal artisans participated.

The annual Aadi Mahotsav – National Tribal Festival is organised by TRIFED an organisation of Ministry of Tribal Affairs, Government of India. The idea is to provide direct market access to the tribal master-craftsmen and women in large metros and State capitals.