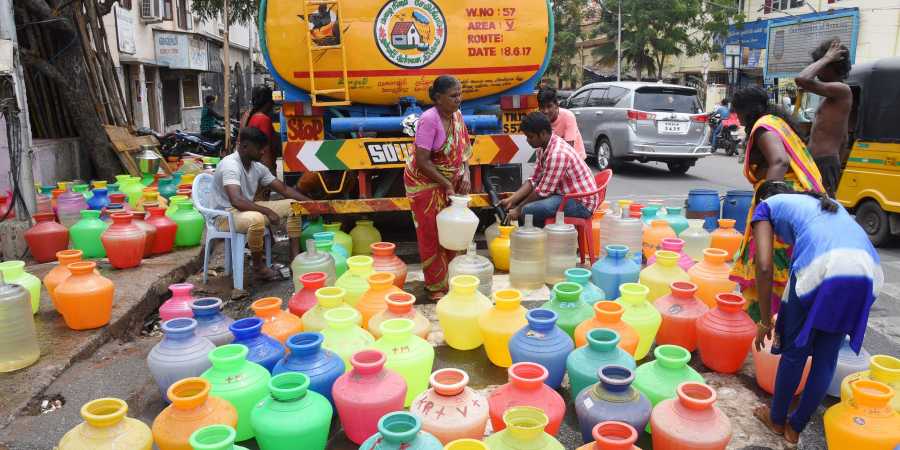 In 2018, a report by Niti Aayog declared that India was staring at the worst water crisis in its history with 600 million people facing high-to-extreme water stress and about 200,000 people dying every year due to inadequate access to safe water. Drinking water crisis in 2019 has reached alarming levels.

In much of India, drinking water is supplied by municipal/government departments. These authorities draw water from reservoirs or groundwater and typically supply drinking water only for a couple of hours each day. That’s the norm year-round. During summers, as water starts depleting, the corresponding supply frequency decreases to once in two days or one in three days. By June, reservoirs almost run dry and everyone including authorities awaits the rains.

India is currently ranked 120 among 122 countries in the water quality index.

In 2018, taps in Shimla went dry during summer, posing an unprecedented water crisis in the hill town.

In 2019, Chennai has run out of water. Residents don’t have enough water to drink, bathe or wash clothes. People are working from home; malls have closed their bathrooms; and restaurants have shut their doors.

India with 17.5% of world population and 11.6% of world livestock population is endowed with only 4% global renewable water resources. However, in theory, India receives enough rain every year to meet the needs of over a billion people. According to the country’s Central Water Commission, it requires at most 3,000 billion cubic meters of water annually and receives 4,000 billion cubic meters of rain. So the cause of present crisis, is wastage and inefficient use.

But, the CWMI report also states that by 2030, the country’s water demand is projected to be twice the available supply, implying severe water scarcity for hundreds of millions of people.

The Union government has announced a new Ministry of Jal Shakti for an integrated approach to water conservation and management with the aim of providing piped water to every rural home by 2024. At time, when we are facing the shortage in quantity of water, this question still remain open -what will happen if there is no water to supply?

This indicates that there is a clear disconnect between water, society and economy. Climate change activists have long argued that water will be the political flashpoint of the 21st century. Water-stressed India will likely be one of the first places to test that theory.

There is a urgent need for a paradigm shift. We urgently require measures that lead towards improving water use efficiency, reducing leakages, recharging/restoring local waterbodies as well as applying for higher tariffs and ownership by various stakeholders.

The World Health Organization (WHO) states that an individual requires around 25 litres of water daily for meeting his/her basic hygiene and food needs. The rest is used for non-potable purposes like mopping and cleaning. This means that for most of the non-potable uses, a quality lower than drinking water is required. About 80 per cent of the water that reaches households, leaves as waste and pollutes our waterbodies and environment. There is a huge potential in reusing and recycling this treated wastewater at least for non-potable purposes, which is cost effective. Thus, for economic efficiency and environmental sustainability, water must be treated and supplied according to usage.

It is time to go back and start using our traditional practice of rainwater harvesting — catching water where it falls. Presently, India captures only eight per cent of its annual rainfall, among the lowest in the world.