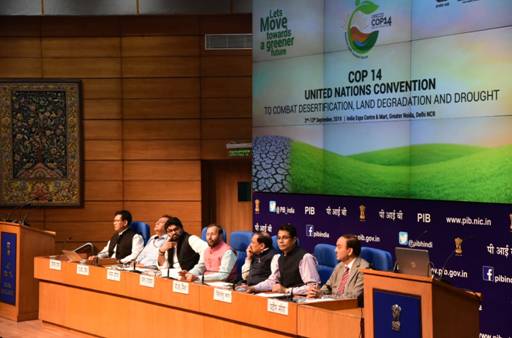 India will be hosting the 14th Conference of Parties (COP14) to the UN Convention to Combat Desertification (UNCCD) from 2-13 September 2019 at India Expo Centre & Mart, Greater Noida.

To fight this menace, India will convert degraded land of nearly 50 lakh hectares to fertile land in next 10 years; it will implement provisions of New Delhi Declaration which is to be adopted at the end of conference and a Centre for Excellence will be established at Dehradun”, said Shri Javadekar.

The Environment Minister also expressed India’s continued commitment to stay on track on a sustainable path to land use and land management. “It is our collective responsibility to do our duty towards protecting the environment and ensuring that there is no harmful impact on  it”, said Shri Javadekar.

Elaborating further on India’s key role as the President of UNCCD COP for the next 2 years, Shri Javadekar said “It is the common resolve of the World to combat desertification and India will lead from the front and move the world in a positive direction, taking into cognizance the support of other countries”.

Delegates from 196 countries comprising of scientists and representatives of national and local governments, global business leaders, NGOs, gender-based organisations, youth groups, journalists, and faith and community groups will present and share their expertise and give an overview to achieve their goals at the 12-day Conference .

The Convention entered into force in December 1996. It is one of the three Rio Conventions along with United Nations Framework Convention on Climate Change (UNFCCC) and Convention on Biological Diversity (CBD). India became a signatory to UNCCD on 14th October 1994 and ratified it on 17th December 1996.

The main objective of the convention is to combat desertification and mitigate the effects of drought in countries experiencing serious drought and/or desertification, involving long-term integrated strategies that focus simultaneously, in affected areas, on improved productivity of land, and the rehabilitation, conservation and sustainable management of land and water resources, leading to improved living conditions, in particular at the community level.

The Convention’s 197 parties work together to improve the living conditions for people in drylands, to maintain and restore land and soil productivity, and to mitigate the effects of drought. The UNCCD is particularly committed to a bottom-up approach, encouraging the participation of local people in combating desertification and land degradation.