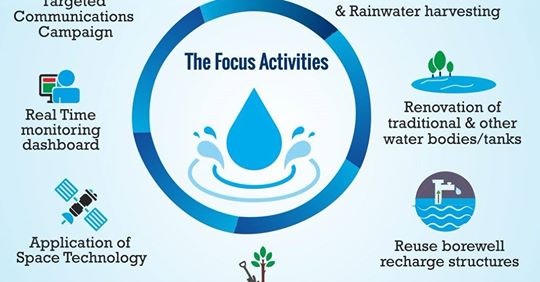 01, July 2019: Union Jal Shakti Minister, Shri Gajendra Singh Shekhawat, launched the Jal Shakti Abhiyan – a campaign for water conservation and water security. The campaign will run through citizen participation during the monsoon season, from 1st July, 2019 to 15th September, 2019. An additional Phase 2 will be run from 1st October, 2019 to 30th November, 2019 for States receiving the North East retreating monsoons.

The ‘Jal Shakti Abhiyan’ will focus on five aspects — water conservation and rainwater harvesting, renovation of traditional and other water bodies, reuse of water and recharging of structures, watershed development, and intensive afforestation. These water conservation efforts will also be supplemented with special interventions including the development of Block and District Water Conservation Plans, promotion of efficient water use for irrigation and better choice of crops through Krishi Vigyan Kendras. Geographically, the focus of the campaign will be on on 1592 stressed blocks in 256 water stressed districts and blocks.

The Jal Shakti Abhiyan will be a collaborative effort of various Ministries of the Government of India and State Governments, being coordinated by the DDWS.

The Prime Minister, Shri Narendra Modi, in his last Mann Ki Baat address on 30th June had given a clarion call to citizens to join hands for water conservation and create a jan-andolan along the lines of the Swachh Bharat Mission, to save water and secure the future. The Prime Minister invited ideas, traditional knowledge, initiatives undertaken, success stories, and films made on water conservation from common citizens, celebrities and NGOs alike.

The Minister also released video of a public service announcement carrying the message of the Prime minister for all citizens to join the water conservation efforts in a proactive manner.