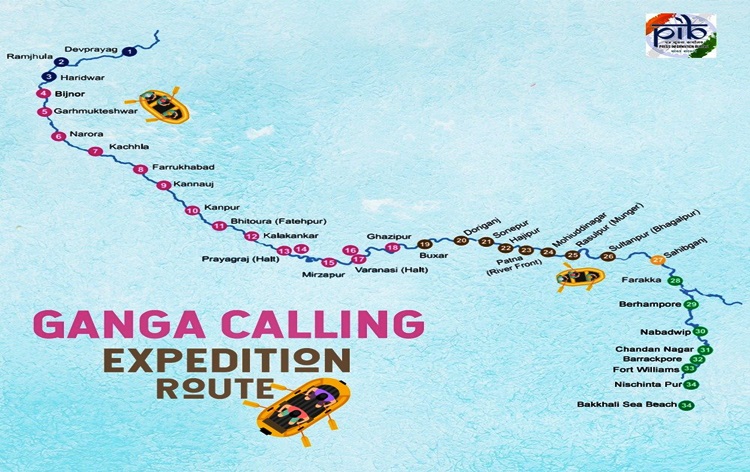 The ‘Ganga Aamantran Abhiyan’ is a pioneering and historic exploratory open-water rafting and kayaking expedition on the Ganga River to be held between 10th October 2019 to 11 November 2019. Starting at Devprayag and culminating at Ganga Sagar, the expedition will cover the entire streatch of over 2500 kms of the Ganga River.

Ganga Aamantran is the first ever effort by National Mission for Clean Ganga to raft across the entire stretch of the river and also the longest ever social campaign undertaken through an adventure sporting activity to spread the message of River Rejuvenation and Water Conservation on a massive scale. The expedition will draw attention to the ecological challenges being faced by Ganga.

A nine-member team of swimmer and rafters from the three Services of the Indian Armed Forces, led by acclaimed international open-water swimmer Wg Cdr Paramvir Singh is being launched in New Delhi by Union Minister of Jal Shakti, Shri Gajendra Singh Shekhawat on 7th October 2019. This nine-member team would be joined by 3 members from NDRF, 2 members each from WII and CSIR-IITR.

The team, during the Ganga Aamantran expedition will take up public awareness campaign on the locations at which they will stop. They will organise mass cleaning drives, interact with students of the village/city and will further the message of river conservation.

Apart from the awareness campaign, the team from CSIR–Indian Institute of Toxicology Research will collect water samples from across diverse ranges of the river for the purpose of water testing, while members of the Wildlife Institute of India will undertake flora and fauna census for the year 2019.

The Expedition would comprise of members primarily from the Indian Armed Forces. The Armed Forces is supporting this expedition extensively by way of involving all the Commands & Units on the Ganga stretch and also the members from the Armed Forces Wives Welfare Association all along the Ganga Basin.

The Minister of Jal Shakti, Shri Gajendra Singh Shekhawat will lead from the front and will not only flag-off the expedition but also be a part of the expedition from Devprayag to Rishikesh.

The expedition is led by Wing Commander Paramvir Singh from Indian Air Force, who is the only person to have swum the entire length of Ganga from Devprayag to Gangasagar in 2015. A distinguished adventure sports enthusiast, he holds 13 World, 3 Asian and 7 National Records.

The team includes Squadron Leader Dipti B Koshthi, who is a Jaguar aircraft pilot and certified open Scuba Diver, trekker and Para Jumper; Sergeant Johny Vj who is an Aqua Parasailing Instructor, certified open Scuba Diver and mountaineer; Sergeant Srihari Sarripilli who is a distinguished adventure sports enthusiast; Corporal Amrendra Vats who is a non-commissioned officer working as Medical Assistant with great experience in handling medical emergencies during adventure sports.

The team also comprises of non-commissioned officers including Corporal Vicky Tokas who has multiple records in the field of swimming, PO Bikesh Kumar who is a Sailor in the Indian Air Navy, and was a part of the expedition Swimming & Rafting down the entire length of the river Ganga from Devprayag to Gangasagar in 2015; Havaldar Rajesh Kumar and Havaldar Devendra Singh of Indian Army who are adventure sports enthusiasts.

The expedition will commence on 10th October 2019, at Devprayag, where Bhagirathi and Alaknanda merge and the Ganga begins. The expedition will continue for 33 days, through Uttarakhand, Uttar Pradesh, Bihar, Jharkhand and West Bengal and culminate on 11th November 2019 at Bakkhali Beach, Frazerganj covering a total distance of almost 2,500 kms.

The expedition will be supported by all the stakeholders of Namami Gange including the MPs of the constituency along Ganga, members of Ganga Praharis, Ganga Vichar Manch among others. The expedition is aimed to reach millions of people on Ganga Basin and would be the largest social outreach through an adventure sporting event ever.