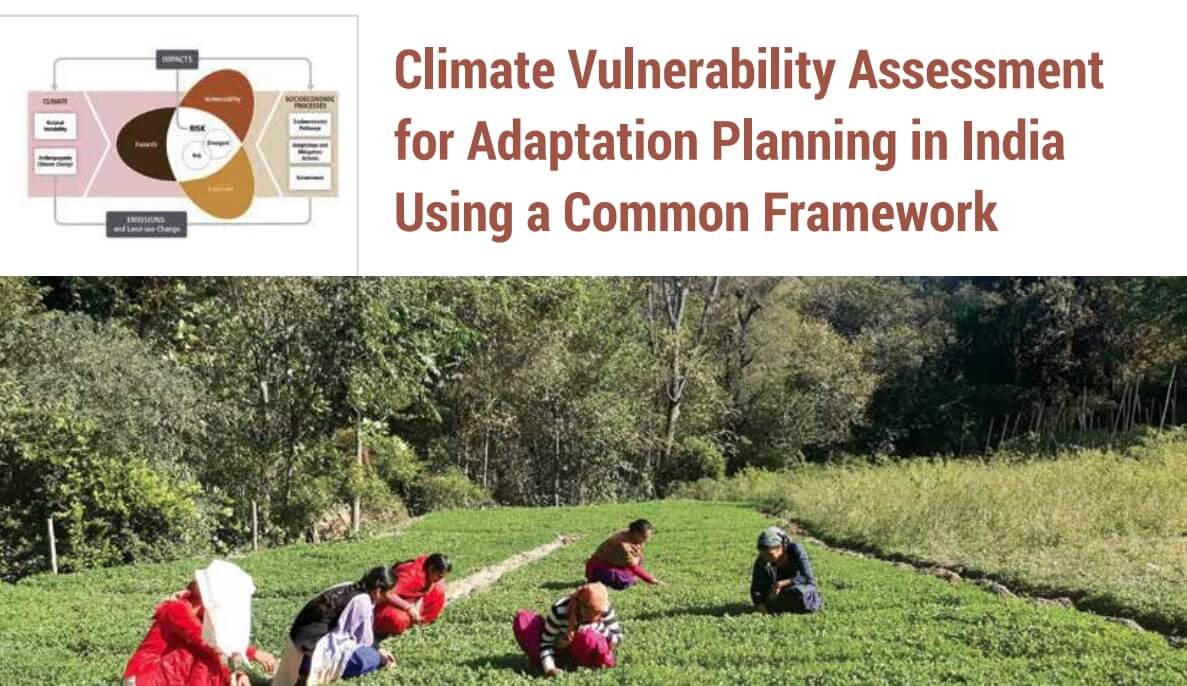 On 17th April 2021, DST Secretary Professor Ashutosh Sharma released “The National Climate Vulnerability Assessment Report”, which identifies the most vulnerable states and districts in India with respect to current climate risk and key drivers of vulnerability.

The activity was conducted in partnership with the the Swiss Agency for Development and Cooperation (SDC), Embassy of Switzerland through the project ‘Vulnerability Profiles for India: State and District Levels’.

Key findings of the vulnerability assessment

“We have seen how extreme events are on rise both in terms of their number and severity. Mapping the parts of India that are vulnerable to such changes will help initiating climate actions at the ground level. The report should be made easily accessible to all stakeholders so that it can benefit climate-vulnerable communities across India through development of better-designed climate change adaptation projects,” said Secretary Department of Science and Technology (DST) Professor Ashutosh Sharma. He also suggested that the maps should be made available through mechanisms like apps to people who need it.

“Assessing vulnerability was the first step towards assessing climate risk. There are two other components like Hazard and Exposure that need to be also assessed to arrive at overall climate risk. DST would take up these assessments in the next phase along with sectoral vulnerability assessments and assessments at sub-district levels,” said Dr. Akhilesh Gupta, Head, Climate Change Programme (CCP), DST.

Prof N H Ravindranath, retired climate change expert from the Indian Institute of Science (IISc), who steered the story, explained that the report has helped identify the most vulnerable states, districts & panchayats and will aid in prioritizing adaptation investment, developing and implementing adaptation programs.

Director of IIT Mandi, Professor Ajit Kumar Chaturvedi, and Director of IIT Guwahati T G Sitharaman hoped that the report will be taken up by the states for initiating climate action.

Ms. Corinne Demenge, Head, Swiss Cooperation Office, Embassy of Switzerland in India, hoped that the assessments will contribute to the development of more targeted climate change projects and that they will support the implementation and the potential revisions of the State Action Plans on Climate Change.

“The assessments can further be used for India’s reporting on the Nationally Determined Contributions under the Paris Agreement. And finally, these assessments will support India’s National Action Plan on Climate Change,” she added.

A total of 94 representatives from 24 states and 2 Union Territories participated in the nation-wide exercise jointly supported by the DST and the Swiss Agency for Development & Cooperation (SDC).

The assessments undertaken with the active involvement and participation of States and Union Territory governments and hands-on training and capacity-building exercises have identified vulnerable districts. Among all states, Assam, Bihar, and Jharkhand have over 60% districts in the category of highly vulnerable districts.

“Vulnerability scores in all districts in India lies in a very small range. It shows that all districts & states are somewhat vulnerable with respect to current climate risk in India,” Dr. Shyamashree Dasgupta, Professor, IIT Mandi

The assessment will help Policymakers in initiating appropriate climate actions. It will also benefit climate-vulnerable communities across India through development of better-designed climate change adaptation projects.

Dr. Anamika Barua, Professor, IIT Guwahati, underlined that this vulnerability assessment is unique as we use a common framework across the states & union territory to make them comparable and also because of the active participation of state & union territory governments.

In a developing country such as India, vulnerability assessment is considered as an important exercise to develop suitable adaptation projects and programmes. While climate vulnerability assessments for various states and districts already exist, the states and districts cannot be compared to each other as the framework used for assessments are different, thereby limiting decision-making capabilities at the policy and administrative levels. This necessitated an assessment using a Common Vulnerability Framework.

Keeping this requirement in mind, DST and SDC supported the development of a Common Framework for Vulnerability Assessment for the Himalayan region based on the definition provided in the latest 5th Assessment report of the Intergovernmental Panel on Climate Change (IPCC) [AR5]. The Common Framework, along with a manual to apply the framework, was developed by IIT Mandi, IIT Guwahati, and Indian Institute of Science (IISc), Bangalore. The framework was applied to the Indian Himalayan Region, involving all 12 States (including pre-divided J&K) through capacity building process.

The outcome of the exercise undertaken was shared with the Himalayan States, have led to several positive developments in terms of some of these already prioritizing and implementing climate change adaptation actions based on these vulnerability assessments.

Based on the positive feedback received from the states and its usefulness to the Himalayan states for implementing climate change adaptation actions, it was decided to roll out the climate vulnerability assessment exercise for the entire country through capacity building of the States.

The task was assigned to the same team, which coordinated to carry out a series of training workshops for the state governments in India towards capacity building for vulnerability assessment.

DST has been implementing 2 national missions on climate change as part of the National Action Plan on Climate Change. These are National Mission for Sustaining the Himalayan Ecosystem (NMSHE) and National Mission on Strategic Knowledge for Climate Change (NMSKCC). As part of these missions, DST has been supporting the State Climate Change Cells in 25 States and Union Territories. Besides other tasks assigned to these State CC Cells, carrying out assessment of vulnerability due to climate change at district and sub-district levels has been their primary responsibility, and the national level vulnerability assessment an extension of the same.