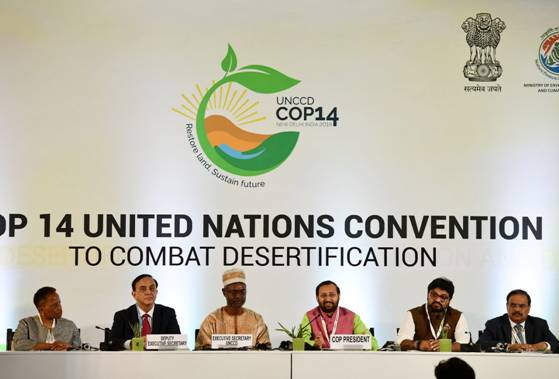 “Be it climate change or desertification, human actions have a role in disturbing the balance of nature. Now people have realised and therefore we are saying that if human actions have caused some damage, positive human action will undo that and make a better world for future generations”.

Pointing to an unprecedented global campaign to save productive land, Javadekar said 122 countries, among them Brazil, China, India, Nigeria, Russia and South Africa, which are among the largest and most populous nations on Earth, “have agreed to make the Sustainable Development Goal of achieving land degradation neutrality a national target.” Shri Javadekar also mentioned that Prime Minister Shri Narendra Modi will inaugurate the high-level segment meeting on 9th September, 2019.

Talking about the importance of such large scale conferences, Shri Javadekar said, “Coming together at a world platform like this to share good stories and experiences will help the world. We can leapfrog for a good start in each country. Therefore, this UNCCD is very important and we expect some good outcomes which will be notified in Delhi Declaration. Delhi Declaration will form the future course of action.”

Echoing these sentiments, Mr. Ibrahim, drew attention to the warnings sounded by recent scientific assessments and the growing public alarm at the frequency of weather-related disasters such as drought, forest fires, flash floods and soil loss, but urged delegates to be mindful of the opportunities for change that are opening up, and take action.

Mr. Ibrahim, thanked the Government of India for hosting the International Conference. “We are very fortunate to be here in India. This is undoubtedly going to be the largest COP ever organised by the UNCCD, said Mr. Ibrahim.

An estimated 7,200 participants that include ministers and representatives of governments, non-government and intergovernmental organizations, scientists, women and youth from the 197 Parties are expected. They will take around 30 decisions with actions that aim to strengthen land-use policies worldwide and address emerging threats, such as forced migration, sand and dust storms, and droughts.

The UNCCD is an international agreement on good land stewardship. It helps people, communities and countries to create wealth, grow economies and secure enough food and water and energy, by ensuring land users have an enabling environment for sustainable land management. Through partnerships, the Convention’s 197 Parties set up robust systems to manage drought promptly and effectively. Good land stewardship based on a sound policy and science helps integrate and accelerate the achievement of the Sustainable Development Goals, builds resilience to climate change and prevents biodiversity loss.