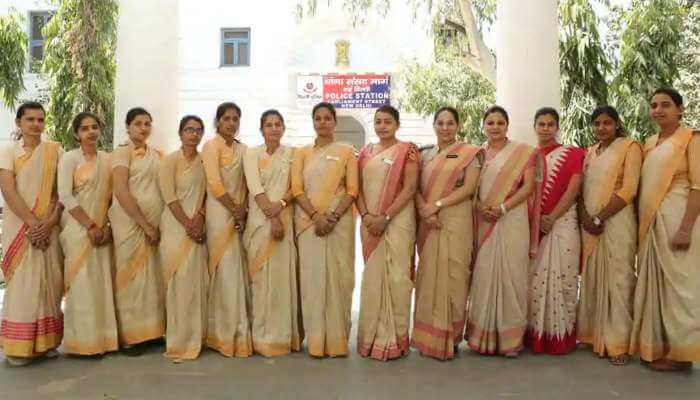 Khadi’s acceptance in various government offices is quickly catching pace. The latest government agency to have adopted Khadi is the Delhi Police which is purchasing elegant Khadi Silk Sarees for its women front desk executives at its establishments.

Khadi and Village Industries Commission (KVIC) has received a purchase order for 836 Khadi Silk sarees worth Rs 25 lakh from Delhi Police that will be supplied in less than two months. The dual-tone sarees will be made of high quality Tasar-Katia Silk. The sample of the saree was provided by Delhi Police which was accordingly developed by KVIC and approved by Delhi Police. The sarees will have a mix of natural color Tasar Silk and Katia Silk in pink color.

KVIC Chairman Shri Vinai Kumar Saxena said the latest purchase order from Delhi Police shows the growing popularity of Khadi which will go on to strengthen Khadi artisans. “Over the years Khadi has become a trendsetter. Khadi is handcrafted and so it is the most comfortable fabric. Not only common people particularly youngsters but various government bodies too have adopted Khadi. This is a big boost to our artisans spinning and weaving Khadi in remotest parts of the country,” Saxena said.

The Tasar-Katia Silk sarees for Delhi police are being prepared by traditional artisans in West Bengal. Tasar- Katia Silk is a dual-tone fabric made with a blend of Tussar and Katia silk. It is mostly woven by traditional artisans and is identified by its thick and heavy texture created by using two different threads of Tasar and Katia. Its rugged and rustic appearance but porous weave makes this fabric perfect to wear in all weather.

Khadi India has also designed and prepared uniforms for over 90,000 postmen/postwomen in the country which in now also available online. Khadi India is a trademark owned by KVIC, Government of India.