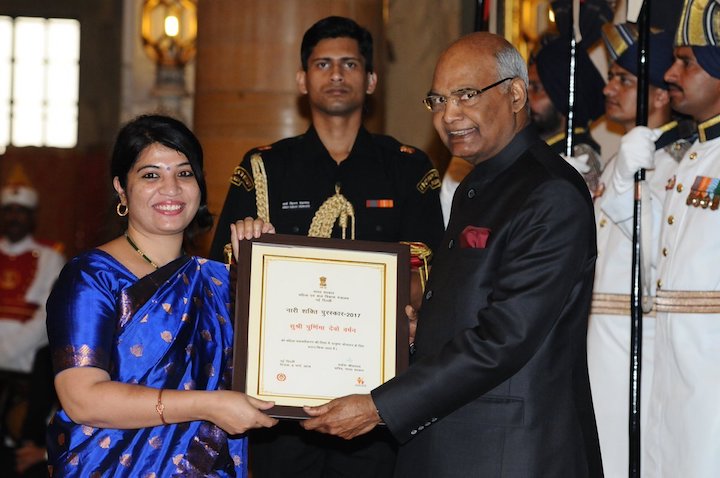 Purnima Devi Barman grew up in Pub Majir Gaon, a village on the banks of the Brahmaputra in Kamrup District, Assam. Her grandmother instilled in her the love and passion for nature and as a child, she would see the birds land on her grandmother’s paddy fields. By the time she was seven years old, her grandmother had helped her identify several avian species.

But it was during her Masters studying ecology and wildlife biology, when her professors spoke of the endangered Greater Adjutant Stork, which were then nowhere to be seen in her grandmother’s paddy fields. Unlike other popular species of animals like tigers or rhinoceros, the Greater Adjutant never enjoyed the same kind of recognition.

The greater adjutant is a member of the stork family, once found throughout much of South and Southeast Asia. However, the widespread destruction and degradation of the wetlands that this scavenger bird needs to forage, and the loss of its nesting trees, led to a decline so severe that the Greater Adjutant went from being one of the most common storks to the rarest.

By the 1990s, one estimate put the number of Greater Adjutants at a mere 1,000 or so. Today, its IUCN status is Endangered. In 2014 the Zoological Society of London identified the bird as an “EDGE” (Evolutionarily Distinct and Globally Endangered) species, meaning one that is close to extinction.

Barman comes to the rescue

In 2007, she chose greater adjutant as the focus for her Ph.D. in wildlife biology. Working in the villages of Kamrup District in the Brahmaputra Valley she found very few Greater Adjutant nests. The reason being people viewed these birds as dirty pests, so much so, landowners routinely cut down the tall trees that Greater Adjutants nest in. Soon she realised that a PhD would not be enough and made it her job to understand why the numbers were dwindling, speak, educate and motivate the people to save it.

She devised an ingenious public relations plan to change the mindset of the people about these birds. Working alongside Aaranyak (Guwahati-based NGO), she began a one-woman campaign to redefine the bird’s identity within local communities, getting them to take “ownership” of the conservation process.

Along with studying Hargila (Local term for Greater Adjutant) behaviour atop her bamboo platforms, Purnima conducts awareness classes for students and takes part in stork rescue and rehabilitation. In 2015, she formally established the ‘Hargila Army’ of women working for the conservation of this endangered species.

To make greater adjutant part of community, Purnima began weaving the hargila into regional traditions and livelihood activities. She incorporated stork characters in Durga puja processions and introduced the bird into folk songs. She supplied yarns and looms to help housewives weave gamochas (traditional cotton towels) with hargila motifs. As a result slowly, the communities started accepting the bird as a part of their society.

Barman knew attitudes had changed when she began getting calls from villagers whenever Greater Adjutants fell from their nests, something the birds do with alarming regularity, especially in monsoon season.

Since 2010, not a single nesting tree has been cut down in the areas where she does her outreach work. In 2019, we have about 200 nests in the same colony. This colony contains the highest concentration of Hargilas in the world,” says Purnima, in an interview to Better India. The global population of greater adjutant storks is estimated between 1200-1800 and around 800 of them are found in Assam, and another 150 in Bihar (Ref).

Purnima Barman is fondly referred to as the ‘Hargila Baideu’ (Stork Sister) by the local community for the work she has been doing for the birds.