Use of Plastic for Road Construction in India 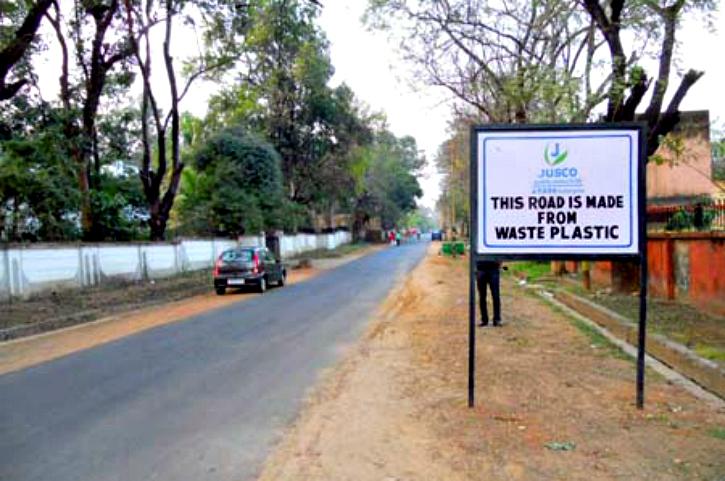 As of 2017, nearly 8,300 million tonnes of virgin plastics have been produced globally. Of this, only around 9% is recycled and about 12 % incinerated and so a total of about 79 % finds its way into landfills or the natural environment. There has been numerous studies & researches to overcome the growing problem of plastic waste disposal. One possible solution that has made its mark in following years is using plastic for road construction. In 2015, the Union Government issued guidelines for use of plastic waste in roads of National Highways on pilot basis.

The problem of Plastic Waste in India

India consumes an estimated 16.5 million tonnes, as per this June 2018 report of Down to Earth. Additonally, according to industry body FICCI, 43 per cent of India’s plastics are used in packaging and are single-use plastic. Consequently almost 80 percent of total plastic produced in India is discarded. Some of it is either burnt leading to air pollution, ends up in landfills or clogs drains. It chokes animals who eat plastic bags, etc. Plastics found in fields blocks germination and prevent rainwater absorption.

Use of Plastics for Road Construction: Background

Since 2001, the plastic man of India R. Vasudevan, Dean, Thiagarajar College of Engineering, Madurai, and his team at the Centre for Studies on Solid Waste Management (CSSWM) have been researching on feasibility of using Plastics in construction of roads. Laboratory results of mixing waste plastic with heated bitumen and coating the mixture over stone proved positive and he implemented the use of plastic waste on a road constructed inside the premises of his college in 2002. In 2006, the Thiagarajar College of Engineering received the patent for this technology. Later, a performance appraisal by the Central Pollution Control Board (CPCB) showed that plastic roads did not develop familiar defects: potholes, rutting, ravelling or edge flaw, even after four years.

Besides improving environment sustainability, roads made by Plastics are found more durable and cost-effective. Plastic and bitumen bond well together because both are petroleum products. This combination enhances the road’s ability to carry weight, as well as its life. The roads also show greater resistance to damages caused by heavy rains.

‘Plastic roads’ constructed since 2002 have not developed blisters or potholes,

Economics of Use of Plastics for Construction in Roads

It has been found that modification of bitumen with shredded waste plastic marginally increases the cost by about Rs. 2500 per tonne. However this marginal increase in the cost is compensated by increase in the volume of the total mix, thereby resulting in less overall bitumen content, better performance and environmental conservation with usage of waste plastic (1).

Present Status of use of Plastics for Roads:

The process of using plastics for road construction gained momentum in 2015, when Union government issued guidelines on plastic use with hot mixes for bitumen roads around urban areas. The Ministry of Road Transport and Highways has issued guidelines for use of plastic waste in wearing course of National Highways on pilot basis. The plastic waste has been used in the state of Tamil Nadu for about 11 Km length and about 1 Km length in the state of Kerala.

Subsequently, India has built one lakh kilometres of roads in at least 11 states using discarded plastic (2). The front runners have been following cities:

How Many Kilometres of Road has been constructed using Plastic India ?

As of July 2021, 703 km length of National Highways have been constructed using waste plastic in wearing coat of flexible pavement. This information was given by Union Minister for Road Transport and Highways, Shri Nitin Gadkari in a written reply in the Lok Sabha (3).

Additionally, Ministry of Road Transport and Highways has issued guidelines for mandatory use of waste plastic in Periodic Renewal with hot mixes and in wearing coat of service road on National Highways within 50km periphery of urban area having population of more than 5 lakhs.

If you are a company/organisation working towards solving the problem of plastic waste and would like to feature on our website, please add you company here.

6 thoughts on “Use of Plastic for Road Construction in India”